5719748 Philip Michael Cogan was born in Perth, WA, on 30th June 1952 and completed his secondary education at Aquinas College. Prior to commencing his National Service Philip worked for Western Australian Petroleum as an Acc. Pay and Rec. Clerk. Little did he know then that his NS would only last just nine weeks before all NS commitments were cancelled. However, Philip was one of twenty three Nashos who completed their Officer Training Course in April 1973 after NS had been cancelled.
Phil’s family and friends told of how Philip put to good use the skills he picked up at Scheyville during his short Army career. These skills were used during a varied work life that included running his own catering businesses (one of which catered for the America’s Cup Challenge in Fremantle in 1983), a Service Station (Denmark, WA) and the working fifteen years with Mitre 10. Workmates said that ‘just working with Phil made you want to be a    better person’. 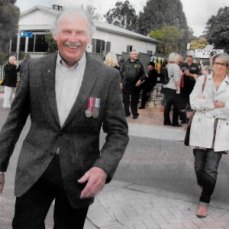 As well as his work Phil was a good sportsman and also found time to be  involved with community projects including surf life-saving and men’s groups.
Phil married a long-time friend Nicki McCarthy (the best looking girl on the  school bus) and together they had Joanna (recently married to Bowman) and  Sarah.
Phil died suddenly on 9th June 2015. The test of how good a person is will be  shown by the number of people who attend their funeral. Over 1,000 people  attended the ceremony to celebrate Phil’s life held at the Denmark Sea Rescue  Club at Ocean Beach on 20th June. Surf Club members formed a Guard of Honour when the casket left the club for a private cremation.
Right: Phil and Nicki at Denmark on ANZAC Day ‘14